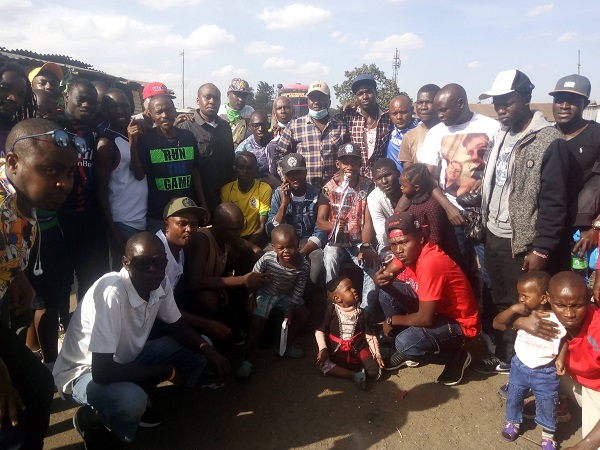 Kothbiro annual soccer tournament champions were given a hero’s welcome when they paraded the trophy to Muthurwa crazy soccer community.

Among those who received the team with the trophy at the famous  Dallas Pentagon base included international boxers David Munyasia, Suleiman Wanjau Bilali and team player Boniface Githaiga, who are also products of the Estate who saluted the team for a job well done.

“I’m happy beyond what words can express and urge more well-wishers to come on board for the team to achieve more,’’ Bilali commented.

Team coach Steve “Balozi”Ochieng heaped praise on Starehe MP Charles “Jaguar” Kanyi, Harambee Stars captain Victor Wanyama and his siblings Macdonald Mariga and Thomas “Heskey” Wanyama whom he described as one of the brains behind the success of Muthurwa-based Dallas FC in the just concluded Koth Biro tournament staged at Ziwani Umeme sports ground in Nairobi.

The team’s Head Coach Stephen “Balozi” Ochieng heaped praise on Wanyama and company for their philanthropy towards the team since the start of the 47th edition of the tournament.

Dallas won the title after beating Ruaraka Allstars 8-7 on post match penalties after a barren draw in the final that attracted one of the biggest crowds ever seen since the start of the tournament.

Speaking during the homecoming party of Dallas in Muthurwa, Balozi said the support they received from Wanyama, a product of the neighbourhood alongside Mariga, will remain etched in the memories of the youthful side

“The support was overwhelming and we cannot thank Jaguar and Mugubi enough. There was also this guy Owino (Ken), utility player Cerel Ochieng’, Steve Aruro and the elderly team advisor Mutiso Mwanzia who gave us a lot of encouragement,” said Balozi.

The tournament was fiercely contested with Balozi, a former Nakumatt and MOYAS player and alumni of Kitale’s St. Anthony’s and Lang’ata High School, describing the match against Ruaraka as the toughest ever in the entire  tournament that attracted over 68 teams.

“Our opponents(Ruaraka) had experienced players like Collins “Gatusso”Okoth former Gor Mahia/AFC Leopards midfielder and Mathare United Tyson Otieno.We had to apply all the tricks in the book to beat them,” he said.

Interestingly, Dallas campaign in the event started with a 2-1 loss to Huruma Cranes in group stage before earning a walk-over on Baba Dogo.

They then drew 1-1 with Ruaraka and entered the round of sixteen and beat Kahawa United 3-1.

In the quarter final, Dallas beat Ezekiel Akwana’s Kajiado All Stars 3-1 and reached the semi finals where they humbled Huruma ASEC on penalties.

The tournament was marked with stoppages, and re-scheduling of several matches .Outgoing Champions Kingstone FC twice disrupted two quarter final matches demanding for payment from the organizers.They stormed inside the pitch during the quarter final tie pitting Leeds United coached by former Tusker FC midfielder Dennis  Nzomo against Ruaraka All Stars.The match had to be postponed during half time to a later date.

Generally, it was a nice tournament full of thrills and drama befitting an annual event that has nurtured big names in the Kenya soccer history.