The ITF East African Tennis Centre has shifted base to Nairobi on a three month temporary relocation.

The center, that was initially located in Burundi opened in Kenya owing to the volatile political environment in Bujumbura and will remain in the Kenyan capital for the period in a deal that provides for extension of the period.

The highly regarded Centre, that nurtures the most talented players in the East and Central Africa offers a unique opportunity for the growth of the sport of tennis in Kenya, given that the best in the region will rub off a bit or a lot of their talent and attitude on the local scene.

Currently Kenya has two players attached to the Centre, Ryan Randiek and Angela Nyangweso who are currently in the country and hoping for a re-union with their colleagues when they get here from a hiatus following the said situation in Burundi.

According to Tennis Kenya’s Vice Chairman Francis Mutuku, the opportunity awarded to young Kenyan tennis player is immense. “We have Kenya’s Judy Nkatha and Kevin Cheruiyot already attached to the programme.” he says of two of the most talented Junior players in the country who are expected to receive coaching from, Head Coach Francis Rogoi who is expected back in the country imminently following a trip to Bujumbura to close up operations on that end, albeit for a short period of time.

The number of players from Kenya at the Centre is obviously set to increase from the current two to a possible 6-8. Mutuku reckons that the only impediment getting into the chance to train at the Centre, for the top players will be availability.

Availability in this case being highly dependent on the school system in Kenya which sees children attend class until late hours as opposed to online schooling and home schooling preferred by those who wish to pursue the highly technical sport of tennis. This however doesn’t dampen the Vice Chairman’s spirit as regards to what having the Centre in Kenya will do for tennis here. “The coaches, Kenyan in addition to the players will get first-hand experience on what it takes to run a performance tennis Centre and this can only be good for tennis in Kenya.” says a clearly excited Mutuku.

Having the Centre have a home in Kenya has only been possible through the generous efforts of Nairobi Club who have offered their courts and also undertaken to accommodate the players on their premises, a courtesy which has Tennis Kenya’s administrator Suzanne Adhiambo overjoyed as she talks about it.

It is easy to say that without Nairobi Club the effort by Tennis Kenya to host the crème- de- la-crème of Tennis in not only East Africa but further, would have been very difficult if not nearly impossible. An informational tit bit is that the players can almost see the nets on the courts from their bedrooms. The vicinity of the courts to the players quarters is roughly one hundred metres which makes all the more sense to have it at this location.

Tennis Kenya expects having this centre serve as a blue print for the tennis fraternity in association with other stakeholders to have a Kenyan owned and run elite centre for the sport of tennis which has been long overdue. “We as Tennis Kenya hope that with this, stakeholders can see the value of fast tracking the efforts by Kenya to have and run its own academy.” says Francis Mutuku speaking in an official capacity for Tennis Kenya and unofficially for any person involved with tennis in Kenya who will nod their affirmation to this. 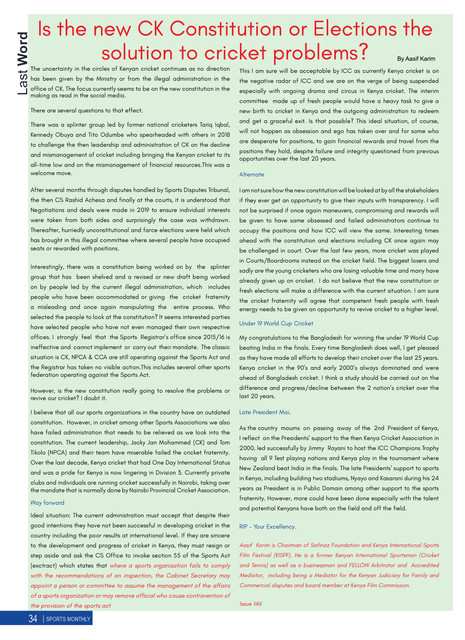