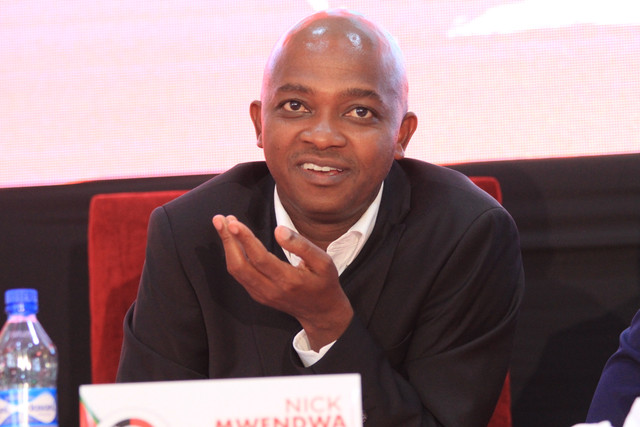 At the forthcoming Football Kenya Federation (FKF) elections, the incumbent president Nick Mwendwa and his deputy Doris Petra are assured of another term as they look at getting re-elected unopposed and are now focused on building on what they have achieved in their first term in office.

Mwendwa, a first-time FKF president, who came into office in 2016, has seen under his watch, the Kenya national men’s football team Harambee Stars qualify for the 2019 Africa Cup of Nations in Egypt after 15 years absence.

Harambee Stars’ qualification to the Nations cup for the first time since Kenya last appeared at the continental show piece in 2004 is without doubt the highlight of the achievements of the Mwendwa administration at Kandanda House.

“Am not bragging but my record speaks for itself and that’s why no other candidate out of the 40 million Kenyans has opposed me which I’ve made history in football to be the first incumbent to be unopposed,”  Said Mwendwa.

“Thanks, Kenyans for that confidence and faith you have in me and I promise that I will not disappoint you in my second term and will deliver on my promises in making Kenya a greater football nation,” added Mwendwa upon submitting his nomination papers for the federation’s presidency to the FKF Electoral Board.

This was made possible by the exposure the team received by Mwendwa sourcing for international friendlies in all FIFA international breaks for friendlies unlike before when the team was subjected to playing local teams. 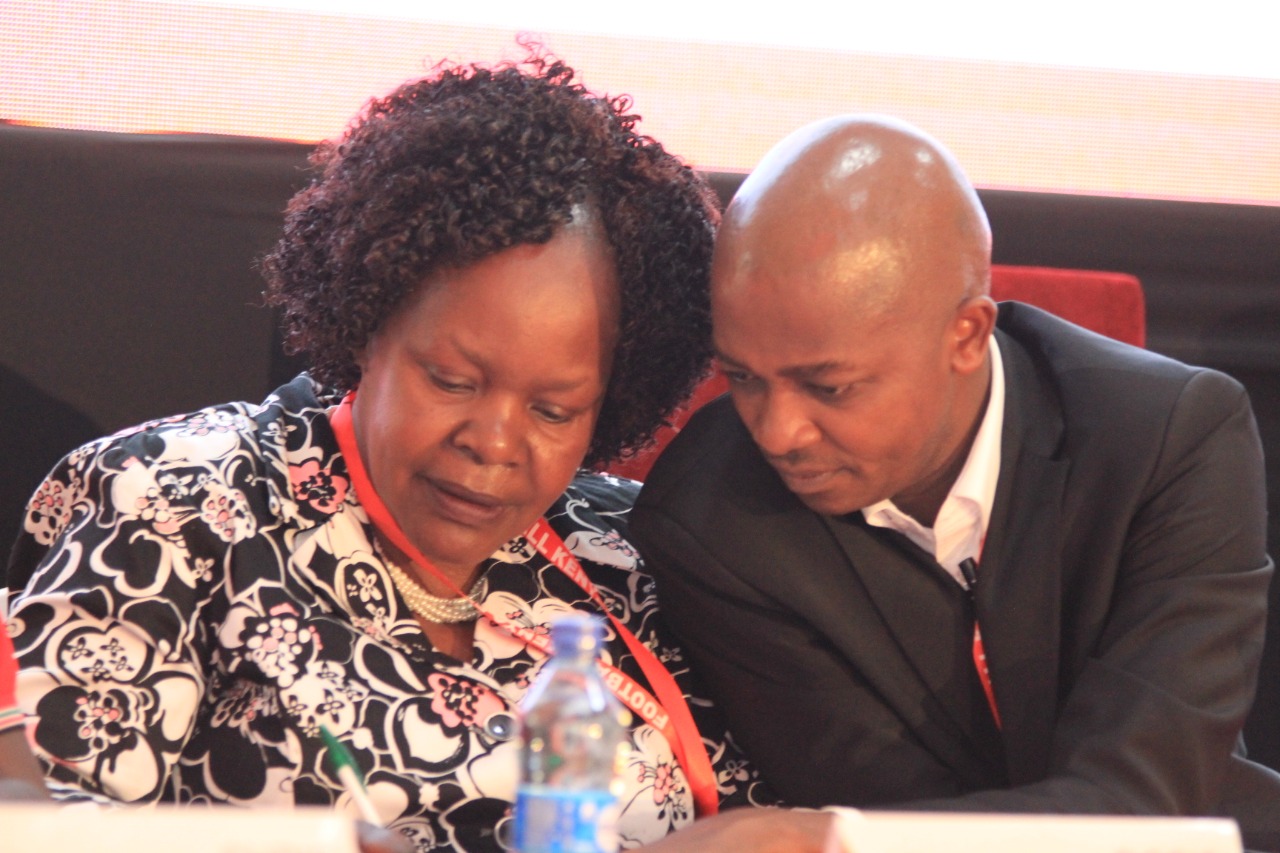 Kenya’s national women’s football team Harambee Starlets qualified for the first-ever for Africa Women’s Cup of Nations in Cameroon in 2016.

In 2019, Harambee Starlets clinched the Confederation of East and Central Africa Football Associations (Cecafa) Championship that was staged in Tanzania; another first of the many.

The federation re-introduced the dormant women’s league which includes the FKF Women Premier and Division One leagues which have resuscitated the game among females and given women a sporting chance.

Mwendwa mooted an ambitious plan of Kenya’s elusive World Cup qualification dream targeting the 2026 World Cup by starting age group junior development program in which national teams have been formed including under 20, 19, 17 and 15 squads to act as a feeder to Harambee Stars.

The federation has constituted youth leagues in over 56 sub-branches and initiated the FKF Elite League and the National Centre of Excellence in promoting youth which is a pillar of the country’s football.

To achieve youth football agenda, FKF has partnered with mobile service provider Safaricom in the Chapa Dimba Under 20 tournaments which is offering players at the grassroots a chance to expose their talent where they get scouted to join the junior national teams.

Mwendwa’s administration has appreciated the role of football’s technical wing through conducting capacity building courses of coaches and referees free of charge with the federation paying for the costs.

In Mwendwa’s four years in office over 3000 coaches have been trained in Basic, Advanced, CAF C License levels, and FIFA instructors to ensure that there are adequate qualified instructors and coaches to train teams from the grassroots to the national level.

The refereeing courses have churned out refined referees for credible match officials to handle matches as they are abreast with the laws of the game and also ascertained their physical preparedness to handle league fixtures.

There has been a steady increase in the rise of match officials considered for international CAF and Fifa assignments.

During Mwendwa’s first tenure, the federation promoted grassroots football through the National Super League and National Division one league. Over 150 of NSL matches were aired live on Bamba Sports tv with the second-tier league for the first time ever in the history of the league in Kenya getting a title sponsor.

The federation has cultivated a cordial relationship with the government and corporates to foster partnerships in promoting the sport.

The Ministry of sports has been financing the senior national teams and sponsors have come on board to support football.

Since Mwendwa took over, the federation has gained the confidence of corporates to come on board as sponsors and they include SportPesa funding the premier league and FKF Cup, Betika sponsoring the National Super League (NSL), Odibets (grassroots football), Betway (the FKF Cup), Bamba Sport (broadcast sponsors for the NSL), Betin for Harambee Stars and Safaricom in promoting grassroots and youth football through Chapa Dimba. Mwendwa has attributed transparency and accountability in FKF management as the key to the recent interest expressed by corporates to promote soccer activities in the country.

During Mwendwa’s reign, the FKF Vice President Doris Petra was elected in the Cecafa executive, in 2017 for a Kenyan to occupy the regional body’s executive for the first time in three decades after William Nyeta who was the last Kenyan to have occupied Cecafa’s electable executive seat.

Petra was the first holder of the Women’s representative post created in Cecafa after its new statutes were enacted during the regional body’s extraordinary meeting in Khartoum, Sudan on September 29, 2017. 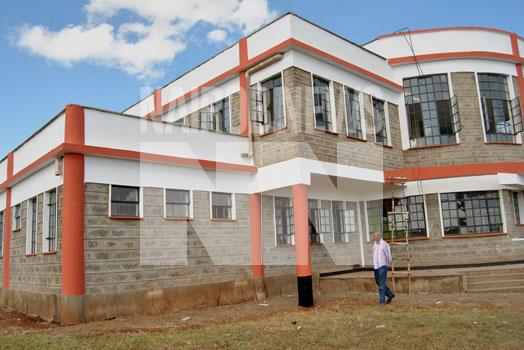 Over four years ago, the Fifa GOAL Project based at Nairobi’s, Kasarani, funded to the tune of USD400,000 (about Kh40 million), stood desolate, making a mockery of efforts by the world-governing body to develop the game locally.

The previous regime of the local football governing body the facility now renamed FKF House by Mwendwa’s administration from Kandanda House now houses the Federation’s secretariat, which is a fully-fledged team that runs the federation’s day to day operations.

“Upon coming into office in 2016, we embarked on revamping the Kenyan Football landscape. First on our agenda was renovating the FIFA Goal Project which had been neglected,” said Mwendwa in an earlier interview.

He added: “FKF House is the secretariat for all football activities. The technical director of football, various departmental heads and communications departments who were squatting at that Nyayo Stadium under Nyamweya’s regime are now based there. It was even appalling to note that before I took over the federation’s finance manager was based in the President’s private office.”

Mwendwa said he intends to have all football-related institutions like referees, coaches, players welfare offices run under one roof saying the Kenyan Premier League (KPL) office will be relocated to the facility with effect as from this year 2020.

“We want to make the operations of football management effective whereby this place will be a one-stop-shop for anybody seeking the federation’s services,” he said.

What awaits Mwendwa’s in-tray is for the Kenyan Premier League (KPL) to get a title and possibly broadcast sponsor, Harambee Stars qualify for the 2021 Afcon in Cameroon and 2022 World Cup in Qatar, Harambee Starlets reach the 2021 Awcon and 2023 World Cup.

Kenn Okaka is a